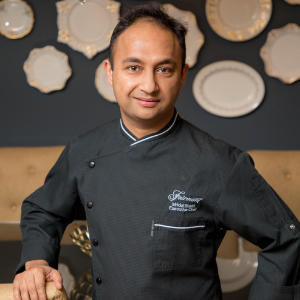 Born and raised in New Delhi, India, Mridul reflected his culinary inclination at a young age.

After graduating in Hotel Management from India, Mridul sharpened his skills by completing his apprenticeship at the Prestigious Taj Hotel, New Delhi. Adding momentum to his ambition in building his culinary experience, Mridul took the opportunity to travel within diverse India to pursue its variety with the Radisson Hotel, Delhi as a Management Trainee before heading to Southern India to work in the Pre-Opening team with the first Marriott Hotel in India in 2005.

With Marriott, Mridul took on the responsibility for the Restaurant named “Rhapsody”, which focused on contemporary tapas from all around the world, which garnered him many accolades. In 2008 Mridul progressed forward and took on a new challenge by joining the Four Seasons team to open their first Hotel in India at Mumbai. Mridul focused on fulfilling his passion by learning new cuisines and developing his palate by focusing on Italian, Asian and Progressive Indian, working at both the prestigious Italian restaurant Prato and later moving to San-QI Restaurant as Head Chef.

Another exciting opportunity presented itself in the same year where Mridul was chosen to contribute his skills and expertise with the award winning AAA five Diamond Four Seasons Hotel in California where he demonstrated his craftsmanship on Southern Californian and Mexican cuisine. In California, Mridul got instant gratification from working closely with the local farms and wineries within the Napa Valley, which inspired him to bring local and fresh ingredients to his guests.

Mridul returned to India in 2009 and assumed the role of Banquet Chef with Four seasons Hotel, Mumbai and later Joining J W Marriott, Pune as a Banquet Chef. Upon taking this responsibility, he promptly redefined the Hotel’s dining focus, paying close attention to guest predilections while emphasizing simplicity and creating a memory with a twist of surprise.

Mridul launched his next career move as Senior Sous Chef with the first Fairmont in India that opened its doors to Jaipur in 2012. In his time with the Fairmont he was appointed to be the Chef Judge of famous TV reality show, Master Chef India Season 3.

Believing in traveling as the most valuable career investment, Mridul pursued his new culinary home and joined the Fairmont Waterfront in 2013 as Executive Sous Chef. Mridul covered extensive ground here by putting into practice his belief that “you don’t need to cook fancy or complicated masterpieces – just good food from freshest of ingredients”.

The year 2017 is when Chef Bhatt decided he needed a new adventure. He moved to Edmonton in June to discover what the Prairies have to offer for culinary experiences. He is excited to be a part of the growing foodie scene in Edmonton, and bring Fairmont Hotel Macdonald to the next level in culinary experiences.

Director of Food and Beverage 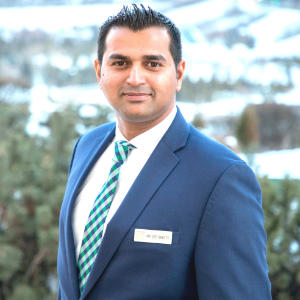 Antosh’s career in Food and Beverage has spanned over 15 years. Beginning at the Grand Hyatt in Mumbai as a restaurant supervisor as well as assisting in the opening of a few fine dining restaurants in India. Antosh went on to gain further leadership experience as a key player in opening Restaurant 360 at the Hilton Warwick/Stratford upon Avon and eventually taking a leadership role in their banquet department.

In 2007 Antosh joined Fairmont Hotels and Resorts where his presence has been a constant positive attribute and vital in modernizing several beautiful and historic restaurants.

The Harvest Room has received several Diner’s Choice Awards from Opentable in addition to being named one of the top 100 restaurants in Canada.

The Confederation Lounge has long been hailed as having the “Best Patio in Edmonton” as well as one of Edmonton’s best cocktail bars.

Antosh spearheads the Harvest Room and Confederation Lounge’s participation in several citywide events to show off the talent and skill of our decorated culinary teams, who recently took home a gold medal at the Canadian Food Championships.

Antosh has now been with Fairmont for 11 years where he has gained experience in countless leadership positions within food and beverage. In 2017, Antosh was appointed as Director of Food and Beverage at the Fairmont Hotel Macdonald, also receiving the award for Leader of the Year.

Director of Food and Beverage